More than 5,000 years after emerging as a culture, Ancient Egypt continues to influence us with its style and design. Pyramids aside, their most stunning contributions might just be jewelry. Ancient Egyptians were empowered by advances in technology, and access to gemstones and precious metals. And it wasn’t long before they became the leading force in manufacturing jewelry and creating long-lasting trends.

Everyone wore jewelry in Ancient Egypt, from poor farmers to wealthy royals. For the elite, jewelry was made from semi-precious stones, metals and glass beads. The poor substituted them with painted clay, stones, shells, animal teeth, and even bones. 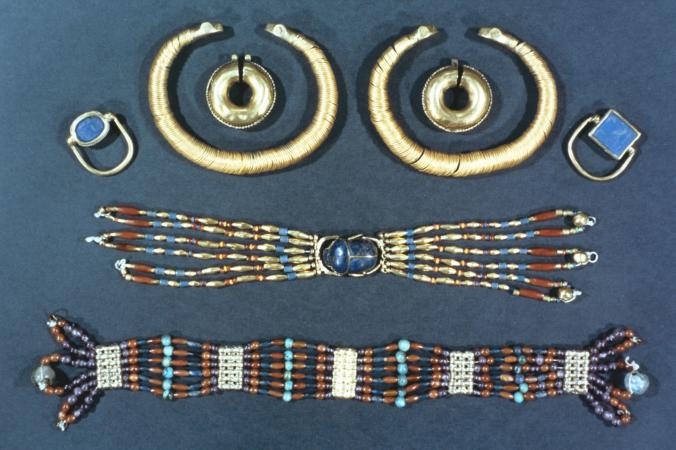 How was Egyptian Jewelry Made?

It’s believed that Ancient Egyptians made jewelry in factories and that multiple workers were involved in the manufacturing process, working in an assembly-line fashion. The very first metal used by Ancient Egyptians was copper.

Gold was considered the flesh of the sun god and therefore a divine color. So, it’s no surprise that it quickly became the most popular metal and a symbol of power, religion, and status. Silver seemed to be quite rare at that time.

Colored glass was another interesting material discovered in Egypt, and was incredibly expensive due to its rarity. It can be found in Egyptian jewelry depicting birds. The more lavish pieces of Egyptian jewelry were inlaid with semiprecious stones and various gems. The most prized stones were lapis lazuli, obsidian, garnet, rock crystal, and carnelian. Pearls and emeralds were the most common stones native to Egypt. 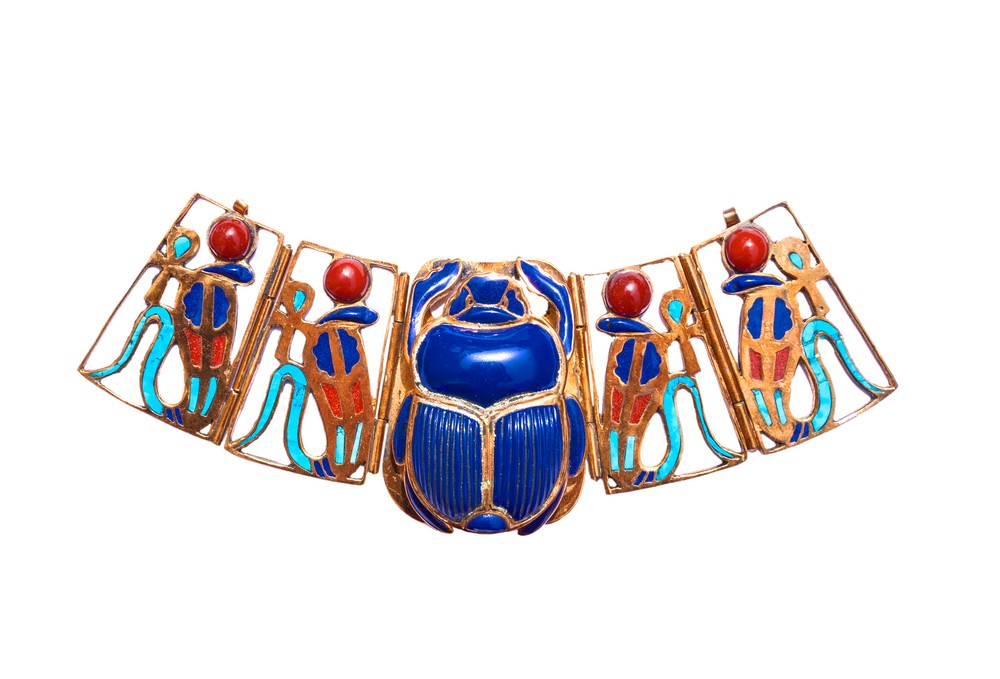 The Ancient Egyptians highly valued personal adornment and Egyptian jewelry was worn by women, men, and children of all social classes. The Egyptians wore jewelry for many reasons, from the mark of status and love of beauty to personal protection and health.

Jewelry was collected throughout a person’s life in order to ward off evil in the present and bring prosperity in the afterlife. It was thought that the more jewelry you owned and wore, the more prosperous you would become during life and in the after-life! All types of Egyptian jewelry were popular, including bracelets, earrings, collars, rings, anklets, armbands, and hair ornaments. 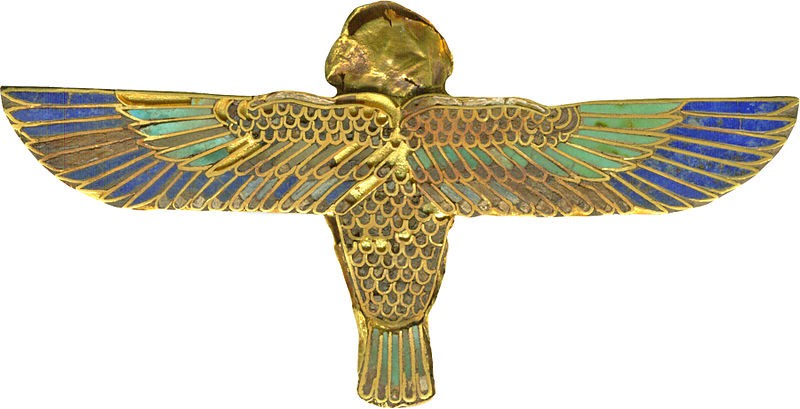 The Egyptians rarely made anything that didn’t have layers of meanings. Protective amulets or charms were believed to protect the wearer. Amulets were made specifically for the afterlife, as memorial jewelry was customary for Ancient Egypt. They were carved into various shapes and forms, including symbols, humans, animals, and gods.

The Most Iconic Ornaments from Ancient Egypt

Egyptian clothing was simple and included kilts for men, loose gowns for women, and very little for children and slaves. The body was adorned with jewelry quite early in Egyptian history. Some of the most iconic ornaments from Ancient Egypt include the following.

Beaded Necklaces was the most popular Egyptian jewelry. These necklaces often featured amulets and charms that were made from varying sizes and shapes of beads. The beads were made from minerals, semi-precious stones, clay, and glass. 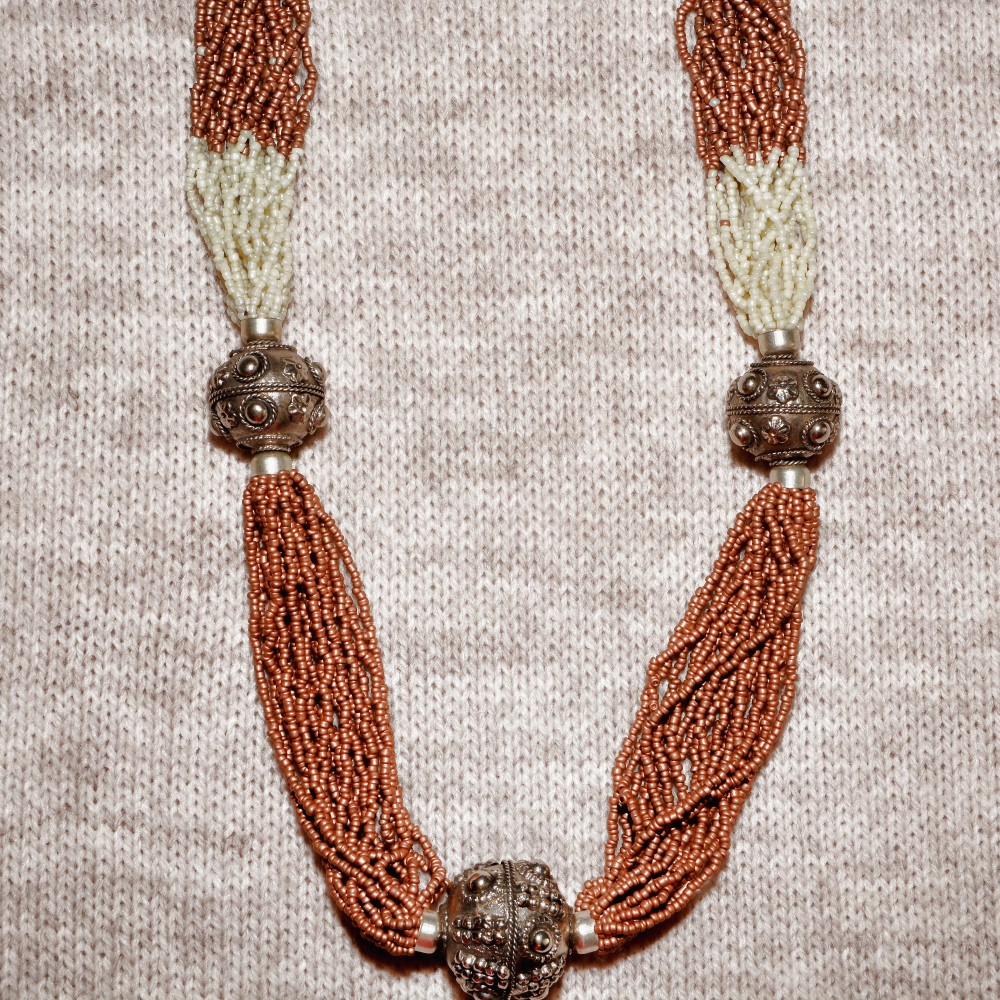 Bracelets were armlets or cuff styles. The Ancient Egyptians created bracelets with complex patterns from small beads of gold, turquoise, lapis lazuli, amethyst, and carnelian. They also constructed beautiful hinged bracelets using gold and lapis lazuli with exquisite workmanship, demonstrating the skill of the ancient craftsmen in this early period of Egyptian history. 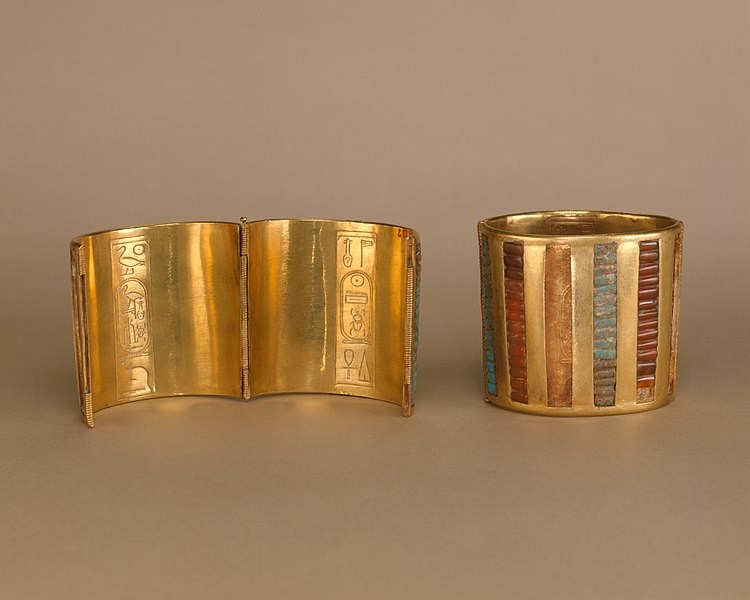 Collars are one of the most iconic forms of Egyptian jewelry. People in Ancient Egypt wore collars called “wesekhs” made of beads, strands of gems, and inlay work. Although the wesekh collar was often made of gold, samples made of other precious metals such as copper and silver, gemstones such as feldspar, carnelian, jasper, turquoise, lapis lazuli and faience, a type of earthware, have also been recovered. 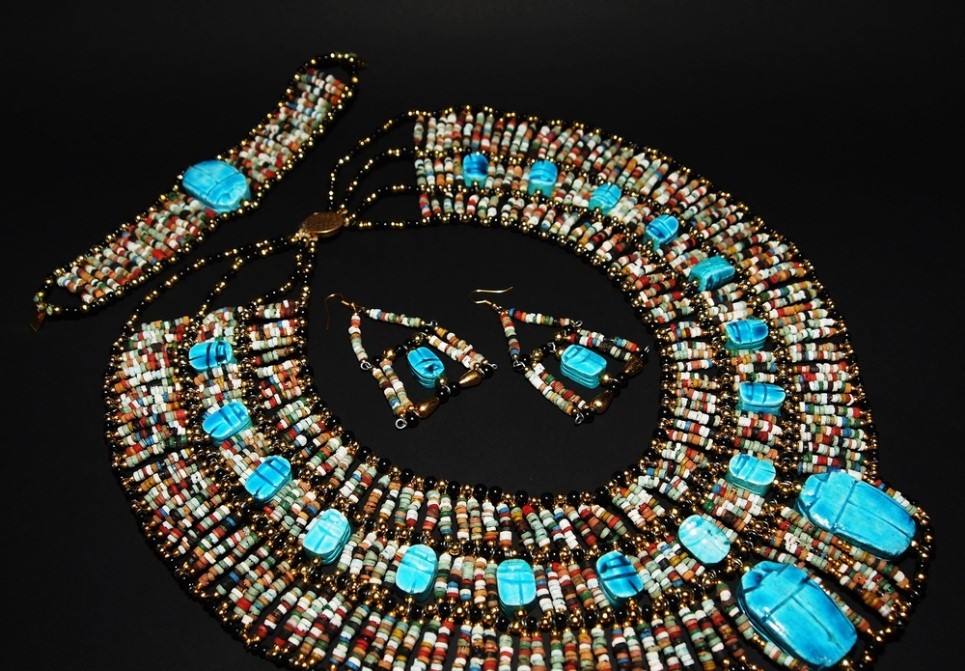 Rings came in both gold and silver, inlaid with gems and glass. Occasionally they were carved with prayers to the gods or magic incantations for protection. 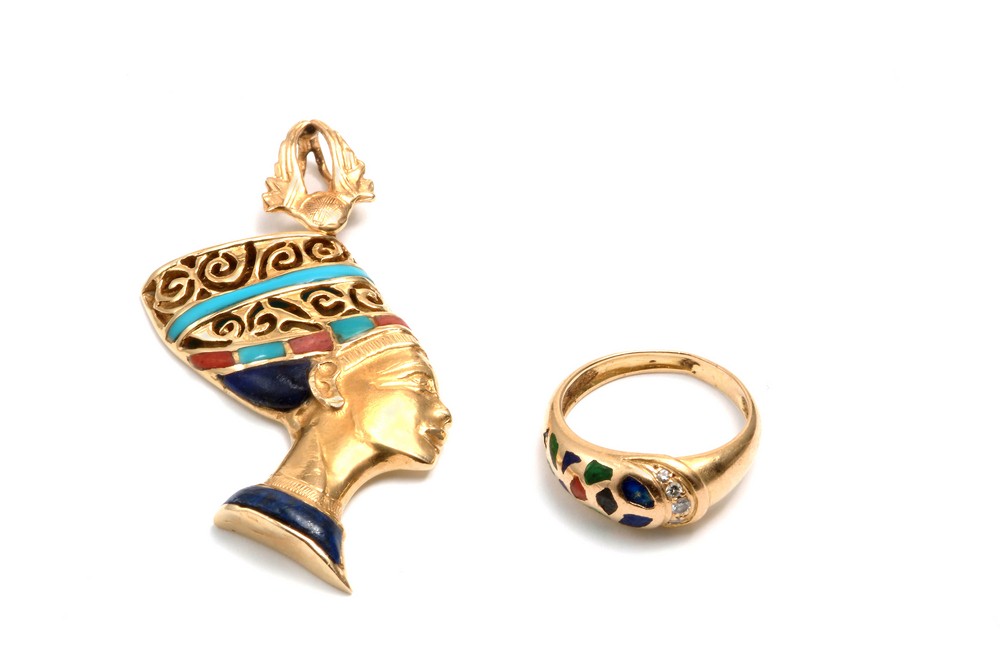 Pectorals were a type of jewelry commonly worn by the wealthier classes and could be worn as a brooch, or as a necklace laid across the chest. It displayed the protective eye, scarab beetles, cobras, falcon wings, lilies, and papyrus blooms, all which represent the king and his power over Egypt. 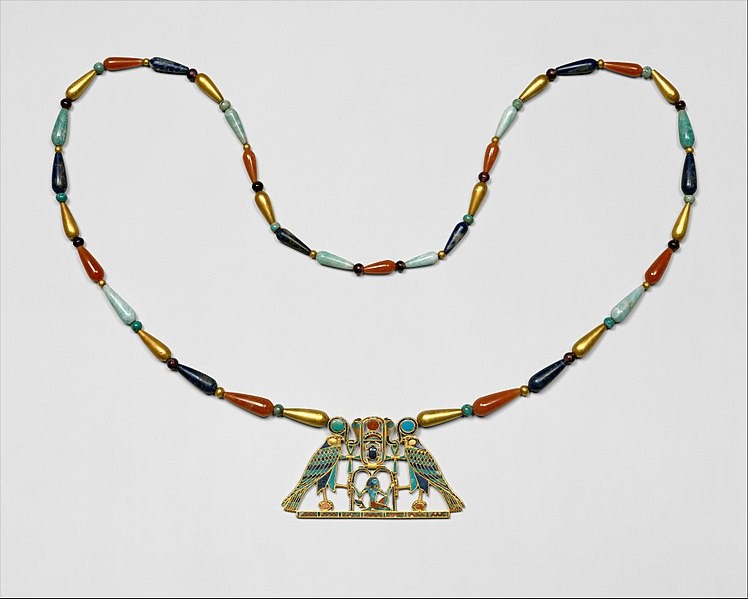 Ancient Egyptian jewelry held religious and symbolic significance and was treasured for its beauty and power against evil and death. It was buried with men and women because Egyptians expected to enjoy wearing their jewelry in the afterlife. Today, admirers of ancient designs can still share in the enjoyment of this magnificent craft.

How Do Shungite Shapes Work?