Discover the Secret History of Birthstones

| For centuries, or perhaps longer, birthstones representing our month of birth have captivated humanity. From mystical power to subtle symbolism, our birthstone is a symbol that communicates who we are. Have you ever wondered how the Western birthstone tradition began? Let’s peel back the layers of history, lore, and more as we peer into the fascinating history of birthstones, discovering their secrets and learning their meaning. Would it surprise you learning our modern birthstone tradition has Biblical origins?

And the second row shall be an emerald, a sapphire, and a diamond.

And the third row a ligure, an agate, and an amethyst.

And the fourth row a beryl, and an onyx, and a jasper: they shall be set in gold in their inclosings.

What is the High Priest’s Breastplate? 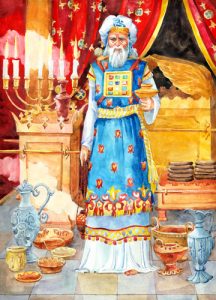 Watercolor of Aaron donning the vestments of the High Priest.

Different lists are given and debated by scholars, but everyone agrees that the Breastplate contains twelve different gemstones. These gemstones each feature an inscription symbolizing one of the twelve tribes of Israel. Accounts of what the actual stones is debatable due to translators favoring different interpretations of the text. Some of the stones suggested by conflicting sources may not have been available in the Ancient World. Or some, like the diamond, would not have been workable with the tools and methods available. Therefore, carving them wouldn’t be possible.

A Jewish historian, Flavian Josephus, initially proposed a connection between these jewels, the months of the year, and the tropical zodiac. Later, St. Jerome, an early and prominent figure of the Christian church, proposed that these symbolic stones could be used by Christians too. His writings have let scholars trace the use of birthstones to at least as early as the fourth century.

Many cultures express different birthstone traditions. In Europe, the early history of birthstones shows that the popular custom associated with the Breastplate was to wear a stone that corresponds with the current month of the year. This remained the case for many centuries, mostly confined to the elite who could afford precious gemstones.

Experts disagree on when people began wearing stones only for their birth month, but the custom is only a few centuries old. The Gemological Institute of America suggests that birthstones, as we know them, were first worn during the 14th and 15th centuries. In “The Curious Lore of Precious Stones,” Kunz suggests that the custom is more modern, only starting in the 19th century.

No matter when it began, it’s been a popular style since! By the early 20th century, the modern birthstone list came into being. These special stones were selected by the Jewelers of America, representing our greater knowledge of gemstones since the early days of gemology. Since then, the list undergoes periodic updates. Spinel, joining in 2016, is the most recent addition. Find your birthstone below, and follow the link to learn more.