Diamonds are perhaps the most famous and popular jewel known to humanity. Throughout history, diamonds have been associated with high culture, as a symbol of the elite’s power and wealth. In addition, some diamonds have gained notoriety for the sordid tales that surround their legacies. Today, we examine the Eureka Diamond, widely regarded to be the first diamond discovered in Africa.

The Eureka is a cushion-shaped brilliant diamond. It weighs 10.73 carats and is graded as brownish yellow in color. 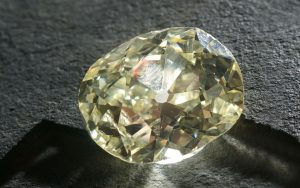 The History of the Eureka Diamond

Perhaps the most famous diamond, the Eureka is the first diamond to be discovered in South Africa. Once it was established that the stone was a diamond, its existence is responsible for generating interest about the possibility of diamonds in Africa. The modern diamond trade may not exist in its current form, good or bad, were it not for the Eureka.

The diamond was originally discovered by a 15-year-old boy, Erasmus Jacobs. He was exploring the area around the Orange River when he chanced upon the shiny gem. The rough gem originally weighed 21.25 carats. After keeping the stone for a while, Erasmus gave the stone to his neighbor who collected stones.

The stone eventually made its way to Dr. W.G. Atherstone in Grahamstown. Notably, the stone was sent in a regular paper envelope by mail! Dr. Atherstone identified the gem as a diamond, and sold it to Sir Phillip Wodehouse, a prominent local citizen.

Sir Wodehouse eventually had the Eureka diamond sent to England, where it was cut into its current form, with a weight of 10.73 carats. In the late 1960s, De Beers eventually purchased the Eureka Diamond and donated the jewel to the people of South Africa. It currently resides at the Kimberley Mine Museum.

How Do Shungite Shapes Work?