Everything You Need to Know about Easter

Despite us celebrating the Easter holiday for such a long time, we still find ourselves lost when it comes to Easter’s origins, traditions, and trends.

For most people who follow the Gregorian calendar, Easter falls between March 22nd and April 25th. However, Orthodox Christians follow the Julian Calendar and generally celebrates Easter a week or two before others. The first recorded observance of Easter occurred in the 2nd Century.

Historically, Easter is a celebration of Jesus Christ’s Resurrection. On the third day after his death, he came back to life. Christians know this as the Resurrection.

In the Bible, Jesus went to Jerusalem to celebrate Passover, a Jewish celebration commemorating the Israelite’s exodus from slavery in Egypt. Jesus then proved His love for humanity by getting crucified on the Cross.

The exact origin of the term “Easter” remains unknown, but here are some of the most popular theories:

In the beginning, devoted Christians decided to include pagan traditions in order to spread their faith. Just like how St. Patrick used bonfires and the sun to explain Christianity to the nature-worshipping Irish, Christians incorporated the pagan goddess Eostre to convert people.

Eostre is the Goddess of Fertility and Spring and was prayed to for a fruitful spring. Over time, “Eostre” is translated to “Easter.”

Another popular theory is that there was a translation error that led to the term “Easter.”

The Latin term for “white week” is “heb domada alba.” This is the ancient reference to Easter week, as the white clothing represents those who were baptized at the time. In Old High German, the Latin term was wrongly translated to “esostarum.” Eventually, that translated into “Easter” in English.

Today, Easter and Lent are closely tied together and is perhaps the most important season for Catholics. The day before Lent is known as Mardi Gras, or colloquially as “Fat Tuesday.” People celebrate their last day for indulging, before the 40 days of Lent period.

Lent is a time to reflect and to give up an important aspect of one’s life to show dedication to their faith. Easter marks the end of Lent and the celebration of the beginning of spring.

The long-eared, short-tailed bunny is thought to bring good children eggs on Easter Sunday. At the beginning of Easter celebrations in the United States, German immigrants brought the egg-laying hare over to Americas who was named “Osterhase” or “Oschter Haws.” As eggs and rabbits are traditional symbols of fertilities and New Life, the two motifs were soon tied to Easter. The Easter Bunny encourages children to be good during Lent and allows family bonding. For example, many children would leave carrots around the yard to encourage the Easter Bunny to leave them gifts.

As the Easter Bunny’s folktale grew, children created nests to encourage the Easter Bunny to lay its colorful eggs. The folktale transformed into a bunny going around leaving gifts instead, such as chocolate, candy, and gifts. Easter baskets soon replaced nests over time, as they were easier to construct and fill.

Now, Easter Baskets are filled with small gifts and are not restricted to just children. 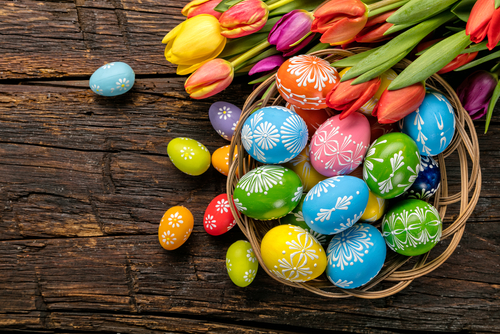 Easter Eggs are brightly dyed eggs. The tradition dates back to the 13th Century when consuming eggs during the Holy Week was strictly prohibited since the egg is a symbol of Jesus’ Resurrection. To not confuse eggs that were laid during the white week, priests would paint the eggs in a different color to identify the “Holy Week” eggs. Orthodox Christians would paint the eggs bright red to represent Jesus’ blood.

Eventually, the White House Lawn replaced the Capitol Hill as the site for the Easter Egg Hunt with the President. Today, local parks and even family yards will host small-scaled Easter Egg Hunts!

Easter is the 2nd best candy holiday behind Halloween. As Lent ends, people would consume sweets again as a celebration for Easter. In the 19th Century, Europe began to create chocolate eggs. Another favorite candy consumed during Easter is jelly beans. As their shape is similar to an egg, Easter-themed jelly beans have been a popular candy choice since the 1930’s. In fact, 16 billion jelly beans are produced in the United States every year just for Easter!

The Easter Parade has been a New York tradition since the mid-1800’s. Back then, upper-class citizens would show off their new spring clothes, after Easter Service, at Fifth Avenue. Curious, many working-class citizens would gather to watch the wealthy flaunt their fashionable outfits.

Today, Manhattan shuts down Fifth Avenue as people wear exaggerated bonnets and hats, watching the Easter Parade. It is important to note that the parade has no religious connotation, and it is just an inclusive day for family fun.

To celebrate the arrival of the Spring season, many families would tend their gardens. In fact, many would begin to decorate their gardens with whimsical decorations. Families with younger children would plant bright flowers, such as marigolds and petunias.

If you are a beginner in gardening, here are some tips and tricks!

Finally, families and friends would gather to indulge in the food they gave up for Lent. There are holiday meals filled with eggs, ham, cheese, bread, and sweets! Still struggling to think of what to cook for Easter? Here are some delicious recipes to try! 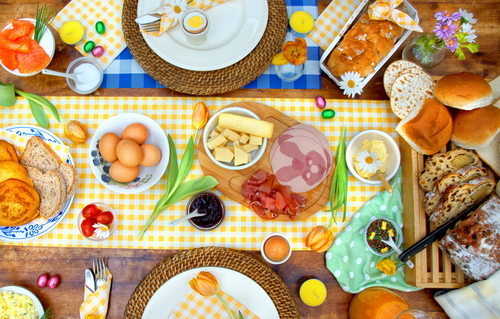 What to Wear on Easter?

Keeping up with the tradition of sporting new clothes on Easter, you could also invest in your own new clothes to wear for your brunch!

As the sun begins to shine brighter than ever, definitely look into fancy looking hats and bonnets as you watch the Easter Parade!

To show your dedication to your faith, make sure to wear some cross jewelry on Easter. 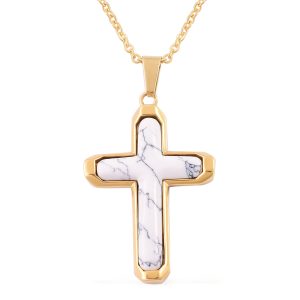 What are you doing for Easter this year? Let us know in the comments down below!

Next post Spring Makeup Trends for 2018: Spa Skin and More

Previous post The 6 Best Ways to Toughen Up Floral Patterns

The History of Giving Cross Jewelry