The Prehistoric Story of Baltic Amber

Not only is amber a striking gemstone, but it also tells an intriguing story. This rare and exotic stone is known as a “window to the past” because of its unique properties.  Amber is fossilized pine tree resin, and it often contains prehistoric plant material, insects and strands of DNA. Amber is one of the rare, few gems that possess an organic origin. A fossilized tree resin, conditions must be precise for it to form. This takes many thousands of years to occur! Over the ages, various deposits have been unearthed. Despite this, none is more famous than Baltic amber, sourced from the Baltic Sea.

How is Baltic Amber Formed? 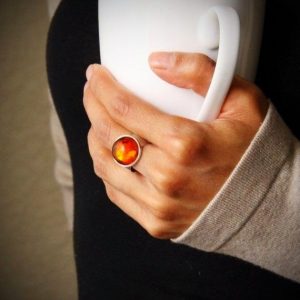 For amber to form, it must first go through a lengthy process. Resin from trees hardens and is buried through natural processes, protecting it from further decay. A mixture of heat and pressure from being buried forces the resin to change over many thousands of years. As it slowly hardens it eventually transforms into the gem, we identify as amber.

Amber from the Baltic region was deposited from the Eocene through Oligocene periods, approximately 44 million years ago. Expert estimate that prehistoric trees produced enough resin for over 100,000 tons of amber.

For a very long time, it was thought that Baltic amber only formed from a single ancient species of tree, Pinus succinifera. We’ve learned only recently, starting in the 1980’s, that this isn’t the case. Several species of prehistoric trees have contributed to the formation of this golden gem. New research suggests that amber was generated from trees all belonging to the same family, Sciadopityaceae. However, this has yet to be widely accepted.

Where is Baltic Amber Found?

Generally speaking, any of the countries that comprise the Baltic region may produce Baltic amber. These countries connected to the shores of this sea include Denmark, Estonia, Latvia, Finland, Germany, Lithuania, Poland, Russia, and Sweden. This is because an enormous deposit of the gemstone rests at the bottom of the Baltic Sea. Heavy and severe storms can cause the material to wash up along the coastline.

In practice, things are entirely different. The majority of amber from this are, estimated up to 90%, is mined at Kaliningrad Oblast, Russia. At this location, the gem is mined in an open-pit mine. Machines are used to blast water against the bluish-gray earth of the pit. Forming slurry, this washes down for collection. The pulp mixture is then carried by pipe for filtering. Several stages of filtering are employed in collecting rough amber. During the first phase, workers will manually collect the largest specimens. During the second stage, a finer filter is used to collect any remaining product.

After this collection process, the material must be washed, dried and sorted. Dirty rough is passed through sieves to clean off remaining earth through several passes. Next, the amber is processed through a separator to identify pieces that might have undesirable inclusions, such as wood. The heavy material will go to the bottom. Afterward, the gem will be cleaned again, and sent for drying. Finally, the cleaned rough will be processed through a vibrating machine where it will be sorted by size.

Baltic Amber in Jewelry and More 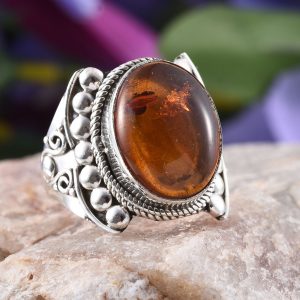 Since Neolithic times, amber has been utilized by humanity as a decorative object. One of the oldest known amber artifacts was found in Gough’s cave in southern England. These amber beads date from 11,000 – 9,000 BC.

Baltic amber has been traded within and beyond the Baltic region since antiquity. The gem has seen a wide variety of use throughout the ages. In addition to jewelry, amber is used to decorate buildings, clothing, and household items.

When heated and consumed by flame, amber is known to give off a piney aroma. For this reason, it was often used as an ingredient in fragrances. Nowadays, this scent is synthesized.

Most notably, amber today is valued for its inclusions. Sometimes, these can be simple ones, such as fissures or cracks inside the stone that catch light in lovely ways. The most valuable are those of captured creatures, usually insects or plants.

Next post Creepy Couture: Halloween Jewelry is the Perfect Treat

Why is Heirloom-Inspired Jewelry a Major Trend for 2020?

Why Baltic Amber Jewelry is a Conversation Starter