Why is there a wall around the tanzanite mines?

On September 30, 2017, President John Magufuli ordered a wall to be built around the country’s tanzanite mines. A previous parliamentary investigation unearthed information leads the government to believe some mining firms were illegally smuggling stones out of the country and dodging taxes. The illegal trade of tanzanite has severely impacted the well-being of the country. The idea for building a wall was first established in 2002 during the implementation of the Tucson Tanzanite Protocol. The Protocol is an industry initiative to protect the legacy of tanzanite mining.

Many economic factors lead to building the wall around the mines. 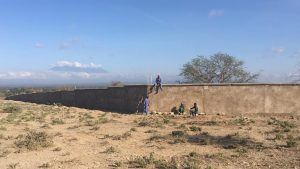 Workers take a well-earned rest during construction of the wall around the mines.

Who is John Magufuli?

The President of Tanzania, Magufuli assumed office in 2015 with overwhelming support. Running on a platform of anti-corruption, Magufuli wishes explicitly to reform mining operations within the country. For many years, Tanzanian mining has faced widespread accusations of fraud. Misrepresenting and underreporting mine production and profit are the most significant offenders.

How will a wall around the tanzanite mines help?

In a statement, the office of the presidency explained, “All tanzanite gemstones will be controlled and will pass through one gate and he (Magufuli) ordered the (central) Bank of Tanzania to take part in the tanzanite buying trade.”

Dealers of tanzanite have been incredibly supportive of the wall. By ensuring that stones enter the trade legally, buyers will know that all associated fees were paid correctly and that the stones weren’t mined through conditions like forced labor. This adds confidence and transparency to tanzanite’s supply chain. Reducing illegal trade of the stone helps stabilize the gem’s long-term prospects.

‘The Great Wall of Merelani’

The wall is one of the most ambitious construction projects ever undertaken in Tanzania, let alone East Africa. This impressive structure incorporates several features that protect the vulnerable mines, miners, and precious tanzanite gemstones.

Can I still buy tanzanite from Shop LC?

Shop LC has long been involved in selling tanzanite, and we are proud to be a top Sightholder of TanzaniteOne through our parent company, Vaibhav Global Ltd. We’re part of a supply chain that gives back to the community by putting money into the local economy. TanzaniteOne supports the Tanzanite Foundation, their non-profit arm funded by ethical sales of tanzanite. This means improvements to infrastructure like building schools and providing clean drinking water. It also means more jobs for Tanzanians. Plus, every item you purchase from Shop LC contributes to One for One, a program that provides hot meals for hungry Indian schoolchildren.

What is the future of tanzanite mining?

Shortly after the inauguration of the wall, President Magufuli disclosed plans to build a smaller wall around Block C. Block C is the source of tanzanite you find at Shop LC. As the most prosperous portion of the tanzanite mines, only registered miners and other necessary personnel will have access to this secure location.

“If the need arises to build a wall around Mount Kilimanjaro then by all means we shall do that.” – President John Magufuli

Interestingly, also disclosed by the President is a new source of tanzanite. Though the new find was not discussed in detail, Magufuli did contend that this new source of rough will be also be secured by a wall around the mine’s perimeter. Current estimates suggest that tanzanite production will continue for the next 25 years. Alone, Block C is expected to produce tanzanite at its current rate until 2042.

Next post Minimalistic Jewelry: The Trend of the Decade